The amended EU fluorinated greenhouse gases regulation entered into force on 1 January 2015. It affects a considerable number of companies. One of the things it regulates are the requirements placed on using certain refrigerants, for instance in refrigerating plants, air-conditioning units and heat pumps. As the fluorinated greenhouse gases regulation contains a number of transitional regulations up to 1 January 2017, we wish to again refer to the coming modifications in good time. 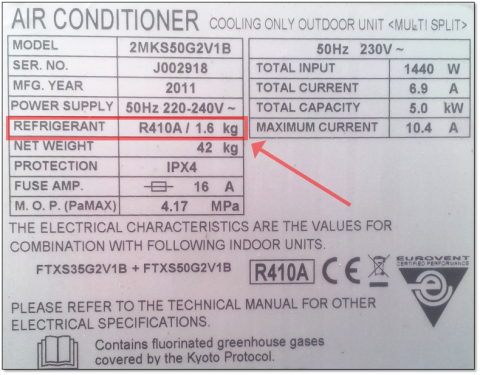 The extended inspection obligation placed on many systems with fluorinated greenhouse gases, which ranks amongst the most important modifications, is entering into force on 1 January 2017. The rule up to 31 December 2016 is that systems containing more than 3 kg of fluorinated greenhouse gases are subject to inspection. The fill quantity can be simply taken from the nameplate of the system in question (see Fig.). However, the GWP of the refrigerant also has a decisive role to play as from 1 January 2017 in addition to the fill quantity. If the fill quantity multiplied by the GWP equals a value of over 5,000, the refrigeration circuit must be checked once a year for seal tightness – and even more frequently for large quantities. A system which for instance includes the aforementioned R407A is therefore already subject to inspection upwards of a2.37 kg fill quantity. The inspection is to be carried out by a certificated refrigeration engineer.

Reference should also again be made here to the final ban imposed on using the R22 refrigerant (ozone-harmful CFC), which entered into force on 1 January 2015. The ban includes replenishing refrigerants as well as all servicing and maintenance work involving accessing the refrigeration circuit, such as changing the filter dryer and oil.

We would recommend taking stock of all the systems containing fluorinated greenhouse gases in operation, recording both the refrigerant and the fill quantity in the process. We would be happy to help you in assessing what needs to be done, for instance within the framework of a regular legal check.